Everything indicates that good times are coming for the cryptocurrency market and Bitcoin,

At least that’s how Ivan Tello of Decrypto.la analyzes it. “But also,” he says, “there are high risks for Uncertainty generated by next Ethereum merge, What do we do with the weights? (A24), highlights that “These last 90 days have been more than good for crypto. Many have gone up to 70%. Ethereum, for example, has practically started at a low of $800 and climbed up to $2,000. The market is slowly starting to reverse the trend, largely thanks to Ethereum, which has taken a huge hit. In fact, it has grown a lot more than bitcoin at least over the past few weeks and there are good opportunities starting to emerge.”

expert refers Next Ethereum Mergeannounced for the next September 15The date on which your mining system will change. That innovation will be responsible for the growth of other cryptocurrencies.

Bitcoin and other cryptocurrencies performance, in detail

Bitcoin: “It did not achieve what Ethereum did. However, It remains positive in last 90 days after 5% fall it had suffered, While it remains within those limits, it has begun to exhibit at least a firm hold on these values.”

chiliso: “in August climbed 78 percent. This is because it is the platform through which clubs can obtain their fan tokens. really, The Argentina national team has direct links with all the clubs and mainly with the World Cup in Qatar.”

Matic: “It went up over a 25%, It deals with smart contracts. And, fearing what is happening in Ethereum, many people are starting to move their smart contracts to other options within Ethereum. It increased its value from US$0.32 to over US$1 in just 90 days.”

Ethereum: “The changes announced for this month are some good and some bad. When talking about cryptocurrencies, immutability stands out as its fundamental premise, that is, it does not change the rules of the game while one is playing. However, this is the second time in its history that will change all of its currency theory. The merge is going to change the mining system to make it more eco-friendly, it’s going to improve the emissions system to make it deflationary, but it also has a negative consequence.” Tello warned.

“It could be that miners don’t support this and a fork occurs, a split of the original chain into two ethereums like this one. This has already happened in 2016. During the last fork, Ethereum Classic emerged. This version is still traded in the market today; The one who had Ethereum in 2016 had two as of July 20Yes from a series that continued and a classic. It was thus that the fork suddenly found itself with the two currencies with different quotes,” the Decrypto.la co-founder explained. 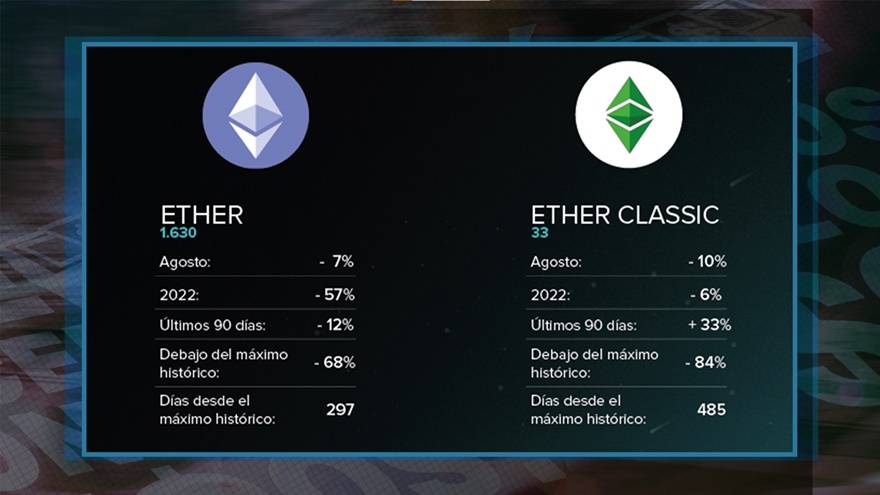 “That’s why investors saw a great opportunity and started buying in large quantities. Today the classics have grown more as they seek alternatives to smart contracts. Everyone holding NFTs by September 15th will have 2, who will have $1 virtual for a chain, will have $2, so this change is a social experiment that could go exceptionally well or generate a huge debacle. Is. For this reason investors are starting to migrate to other smart contract processing coins.”Tello concluded.