Monero was launched in 2014 to make anonymous cross-border transactions without a central authority. It helps to disguise the senders’ and receivers’ information and amounts related to transactions. However, it follows an egalitarian approach in the community for supporting and developing the virtual currency and network. It does not have a fixed coin supply like Bitcoin, so many investors are not investing for long-term capital gain. The users will buy XMR for transactions and for paying gas fees.

Experts believe Monero is highly indebted to CryptoNote and ByteCoin, which are the initial privacy-centric crypto protocol that makes it impossible to tell the transaction details.

Many long-term investors think, Monero will face government regulation in the future for anonymous transactions, which will affect the world economy. That is why it is not a sustainable growth story and does not provide much value in the long term.

On the other hand, the Monero community believes the XMR network makes anonymous transactions possible, so it will gain popularity in the future because the world economy has been shifting to a decentralized ecosystem, and Monero will play an important role. Read our price analysis to learn more about the technical growth prospect of Monero.

At the time of writing this post, XMR was trading around $146.62. It was trading in the upper range of the Bollinger Bands, but it broke the baseline on August 19. After that, XMR is trading in the lower range of the Bollinger Bands. It seems like a consolidation phase, but $153 will work as an immediate resistance level, and $169 will be crucial resistance. RSI and MACD are not bullish on the daily chart.

Overall, Monero (XMR) has been forming higher highs and higher lows, which suggests bullish momentum for the short term. However, the red candle on August 19 may reverse the momentum, and we think it is not an ideal time to invest for the short term in Monero. 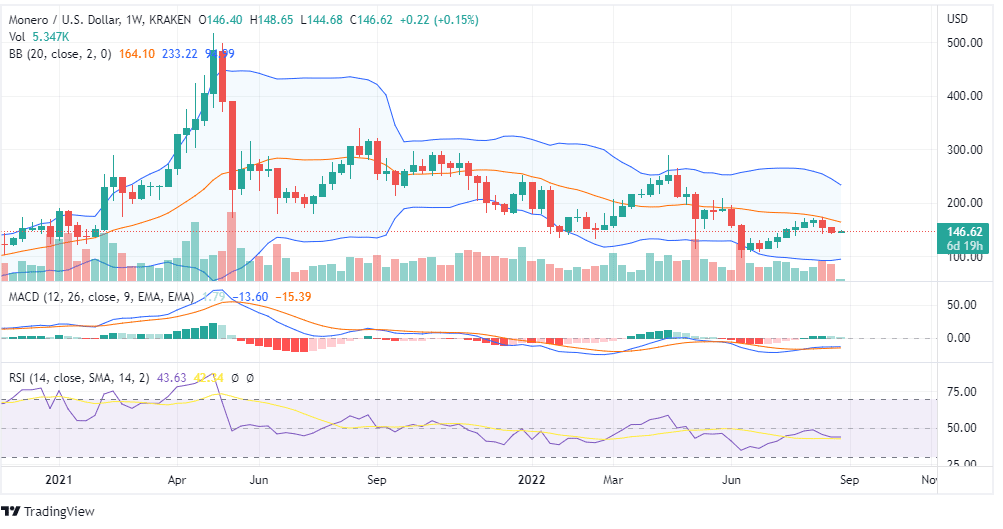 On the weekly chart, we can find an opposite scenario where Monero has been forming lower highs and lower lows. That means the recent high of $170 can be regarded as a higher low, and XMR may break the support of $114 and go as low as $90. Even from the weekly chart, we do not suggest investing for the long term.

Otherwise, you will be in a bear’s trap, which will be hard to recover. Candlesticks have touched the baseline of the Bollinger Bands, while MACD and RSI are neutral. Please do not try to average the price now because no one can assume how much it will go down. It is not an ideal time to invest for the long term until it shows bullish momentum on the long-term chart.